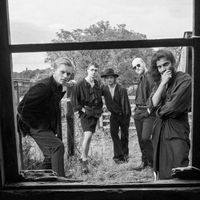 We are thrilled to host Alt Folk Collective Sleepwalking Animals at the iconic Bedford Balham plus special guests.

Sleep Walking Animals “SWA are the underground legends that haven’t been crowned yet, the quality is utterly incredible as they toy with your soul, the sound of genuine world class musicians at work" - A&R Factory - Back from a UK tour, selling out venues in London and Manchester, Sleep Walking Animals are giving it beans, currently recording new music set to be released 2022 and preparing for more live shows. Growing up in Salford together, Tom Glynn-Carney (lead vocals) and Joe Etherington (guitar, vocals) more or less became the brothers they never had. Having been surrounded by music from a young age and attending the same college, they accredit a one off concert performance of The Beatles 'Come Together' as the first incarnation of a steadfast musical collaboration. Alt Folk Rock band Sleep Walking Animals (SWA) were formed with the addition of Jack Brett (bass, vocals), Alex Harford (lead guitar, vocals) and Nuwan Hugh-Perera (percussion, vocals). The quintet now splits their time between Manchester and London.

With Special Guests Say Anise Say Anise is London-based independent musician Emily Barnett. Her music is heavily influenced by the 60s and early 70s era of singer-songwriters, with a focus on story-telling lyrics, soaring melodies and layered harmonies. Her debut EP 'Say What You Want’, released in January 2021, was recorded in various studios across London and mixed by Kristofer Harris (Belle & Sebastian, Ghostpoet). Inspired by a breakup, there is a continuous theme throughout the EP of looking at the world we live in and questioning everything.

Echo Wants Her Voice Back Echo Wants Her Voice Back is a Cypriot-born, London based singer-songwriter, and actress, often described as folk noir with blues rock influences. Her background in literature and short story writing blended her songwriting skills with her love for poetry/prose bringing about the perfect union of her two passions. Her distinctive voice, notable stage presence and compelling lyrics have been praised by music publications, with Songwriting Magazine comparing her to the likes of Kate Bush and Lorde. In 2015, she self released her first EP and amongst other festivals, performed at the 2016 SXSW. Fast forward to today, she has released a series of singles and music videos on her YouTube channel. Her song “Mermaids” co-written with Paris based hip hop artist, The Spectre, was picked up by BBC Introducing as part of its radio showcase in 2020. May 21st. May saw the release of her latest single “Wife” whilst she prepares for the release of her second upcoming EP.